This really is a picture of me!
The UN pass for me was issued in Vienna.

The original plan was to make the entire project in the Bosnian embassy in Zagreb. It was in May 1993, and Zagreb was a safe place. On the other hand, the war in Sarajevo, capital of Bosnia and Herzegovina, was in full swing. Sarajevo had been under siege since April 1992. (You can read the story about the siege of Sarajevo here).
The airport in Sarajevo was in UN hands, but the city was constantly under fire from the surrounding hills.
As because of international law the UN could not transport civilian people (non UN personnel) between Zagreb and Sarajevo, an UN employee asked me if I would be willing to fly to Sarajevo in order to carry out the necessary tasks and training there.
This was not an easy decision. I could have easily handed in the job - no amount of money is worth that one puts his life at risk. On the other hand - without doubt, the people of Bosnia needed help, and by my rejection they would get help either later or not at all. I decided for the flight to Sarajevo.
I got an UN passport as a consultant. In addition a UNHCR identification card with photo was also issued for me in Zagreb. 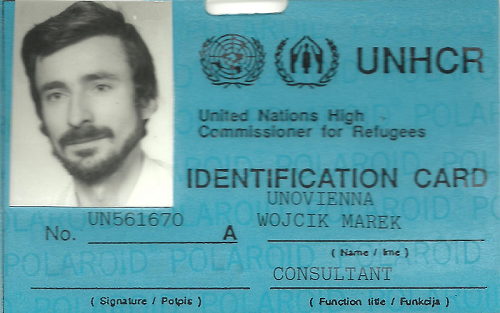 I was flown from Zagreb to Sarajevo with a Russian military plane. We started at 13:00 o'clock on 18th May 1993 - because of the danger of being shot at we flew a detour far over the Adriatic. Arriving at the airport (without bullet-proof vest), I had to quickly carry my equipment consisting of two printers and notebooks over the landing place into security.
At the airport of Sarajevo I heard the first shots - that was a constant acoustic accompaniment during my stay in the besieged city.
I was awaited - two members of the local organization for humanitarian aid picked me up from the airport. A quick slalom run by car over the access road followed. The road was like the moonscape - the proof of recent bombings.
It was about 17:00 when we came to the PTT (post telephone and telegraph) building - a partially destroyed multi-storey house, which was occupied by the UN soldiers. Until now I had not seen a single intact window - an impressive image. Everywhere heaps of sandbags lay as protection against snipers. Even in the room where I had got my bed were sandbags on the window sill.
The atmosphere was indeed tense, but not overly nervous. In the building many UN soldiers were quartered, and quite often also civilians like me. Food I could get in the canteen, but water to refresh myself did not exist. A soldier found me a bulletproof vest, which was full of debris and dust, but anyway some security for me! I returned it at the airport two days later.
Fortunately the emergency power units did deliver current. I had got the two notebooks and printers in Zagreb only a few hours before departure. Now I finally had the opportunity to test them. One of the notebooks did not want to start. So I had to first troubleshoot this issue, and then I worked successfully till two o'clock in the morning. Only then I could go to sleep.

Early in the morning the same two AHA-members took me to the office of the organization for humanitarian help.
where it was safe from snipers. These places the inhabitants of Sarajevo inevitably knew.
The Organization for Humanitarian Assistance (AHA) was then conducted by a Serbian university professor, Dr. Sasha Mirkovic. I installed and demonstrated the notebooks and printers. With Dr. Ajiz Schunje we discussed the technical organization of a communication between Zagreb and Sarajevo and between Zagreb and other logistical centers in Croatia. Thereafter I set up the communication between the AHA and the Ministry of Communications in Sarajevo and developed a session for training purposes.
The second night in Sarajevo I spent in the home of Dr. Mirkovic, where I met his nice family. We had long discussions about the life in a war, and particularly in the besieged city. I asked a young man if there were snipers who would shoot from the high-rise buildings. His answer - given smiling - shocked me: "Yes, in the beginning there were such cases, but our boys quickly made an end to this - a couple of times they forced the respective snipers to jump to from the roof ..."

My return flight was scheduled for the 20th May 1993. In the AHA office about twenty women asked me with tears in their eyes to post their letters in Zagreb. This scene, though not very spectacular, left a deep impression in me.
To the airport we returned in the same way - by car again, and the ride was just like a Formula 1 race - only with obstacles added. The return (again a wide detour) flight over the Adriatic Sea again was with a Russian military plane - you get used to it.
After my arrival in Zagreb I immediately went to the central post office where I posted all those letters.